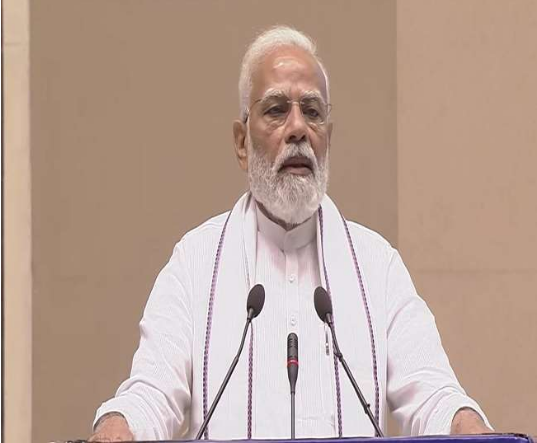 Chief Justice of India NV Ramana and Union Minister of Law and Justice Kiren Rijiju also addressed the conference. In this conference, the simple method of justice for the executive and judiciary and the challenges faced by the justice system will be discussed.

New Delhi, ANI. Prime Minister Narendra Modi today inaugurated a joint conference of Chief Ministers and Chief Justices of High Courts. Addressing the conference, the PM said that the responsibility of the judiciary and the government has increased in the nectar festival of independence. He said that in 2047, when the country will complete 100 years of independence, then what kind of country do we want, how do we make our judicial system so capable that it can fulfill the aspirations of India of 2047, it can fulfill them, these questions That should be our priority today.

The Chief Justice of India (CJI) Justice NV Ramana and Union Minister of Law and Justice Kiren Rijiju also addressed the event along with the PM. At the same time, Chief Justices of all 25 High Courts and Chief Ministers of the states also participated in this conference.

This conference is a living depiction of our constitutional beauty.

During this, the PM said that this joint conference of the Chief Ministers of the state and the Chief Justices of the High Courts is a living depiction of our constitutional beauty. He said that I am glad that I have been able to spend some time with all of you on this occasion.

The roadmap for the judicial system will be ready

The PM further said that in our country, while the role of the judiciary is that of the guardian of the constitution, the legislature represents the aspirations of the citizens. He said that I am sure that this confluence of these two sections of the Constitution, this balance will prepare the roadmap for an effective and time bound judicial system in the country.

Prime Minister Narendra Modi said that in 2015, we had identified about 1800 such laws which had become irrelevant. He said that out of these, the Center has given relief to the people by abolishing 1450 laws. But only 75 laws have been abolished by the states.

Emphasizing on the use of local languages in the court, the PM said that we need to encourage local languages. He said that this would not only increase the confidence of the common citizens of the country in the justice system but they would all feel connected to it.

Addressing the conference, CJI NV Ramana said that ‘Lakshman Rekha’ should be taken care of by everyone, if anything is done as per law then judiciary will never come in the way of governance. If the municipalities, gram panchayats perform the duties, if the police investigate properly and the torture of illegal custodial ends, then people will not have to look to the courts.

Rijiju said – with everyone’s development, everyone will get justice

Addressing the program, Union Law and Justice Minister Kiren Rijiju said that our government is committed to providing justice to all along with Sabka Saath, Sabka Vikas. Simultaneously, thanking the Chief Ministers from all the states and the Chief Justices of all the High Courts for attending the program, he said, “Only by working together with all of you, the chances of getting justice to the common people can increase.”

The conference, which is being held for six years, is discussing the steps needed to prepare a framework for smooth delivery of justice for the executive and judiciary and to deal with the challenges faced by the justice system. Along with this, the issue of formation of ‘National Judicial Infrastructure Authority of India’ for the buildings connected with the judiciary can also arise in this.

The first conference was held in 1953