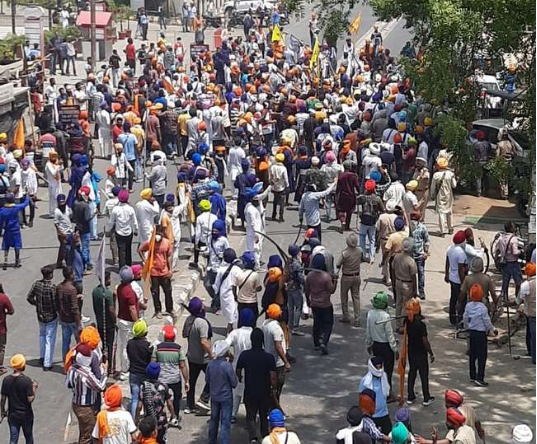 Jagran Correspondent, Patiala. In Patiala, some hotly minded Sikh youths also took out a march against Shiv Sena Bal Thackeray’s Khalistan Murdabad March. They raised slogans of Murdabad giving the name ‘Bandar Sena’ to Shiv Sainiks. Meanwhile, the situation became tense due to clashes between Hindu and Sikh organizations in the Kali Mata temple. Stone pelting started from both the groups. Swords were raised. To control the crowd, the SSP reached and fired 15 rounds of air. During this, Karmaveer Singh, a Hindu leader and SHO of Thana Tripadi, was injured. DC Sakshi Sahni has ordered imposition of curfew in the district from 7 pm on Friday to 6 am on Saturday.

Earlier, the police brought the situation under control around 3 pm. However, members of Sikh organizations have sat on a dharna at the city’s Fawwara Chowk. The youths are eating food sitting on the road only during the dharna. On the other hand, leaders of various political parties including Punjab BJP President Ashwani Sharma and Ludhiana MP Ravneet Bittu have strongly condemned the incident.

Do not disturb the peace of Punjab: CM Bhagwant Mann

At the same time, CM Bhagwant Mann has condemned the incident. He said that peace has been restored in the area. We will not allow anyone to create disturbance in the state. The peace and harmony of Punjab is of utmost importance. He later tweeted that a meeting of DGP and police officers was called on the incident in Patiala. He has directed to investigate the matter immediately. The officers are instructed that not a single culprit should be spared. Anti-Punjab forces will not be allowed to disturb the peace of Punjab at any cost.

IG Patiala Range Rakesh Kumar Agarwal has also appealed to the people to maintain peace. Rakesh Aggarwal said that do not pay any attention to the rumours. For now, peace has prevailed.

When asked how many people were injured, Rakesh Agarwal said that his focus is on maintaining peace and order. DC Sakshi Sahni also reached the spot. He has also appealed to the people to maintain peace.

Singla said that Gurpatwant Pannu, the Convener of Sikhs for Justice, has announced to celebrate the foundation day of Khalistan on 29th April. To answer them, Shiv Sena had also announced to take out Khalistan Murdabad March on 29 April. At the same time, on receiving information about the march, a large number of Khalistan supporters reached. Here, the DC has denied the news of cutting off the hand of the SHO of the police station running on some media channels. The DC has said that no such incident took place or is just a rumour.

Here, IG Patiala Range Rakesh Kumar Aggarwal along with DC Sakshi Sahni and SSP Nanak Singh have taken stock of the spot and said that the atmosphere that was spoiled after the firing and rumors by the police will be investigated at every aspect level.

At present, DC Sakshi Sahni has called a meeting of the leaders of both the organizations to restore a peace. Along with the IG, the DC has appealed to the residents of Patiala to cooperate with the administration in maintaining peace. At present the situation is under control, till this time a police employee and a member of a Sikh organization have been injured.