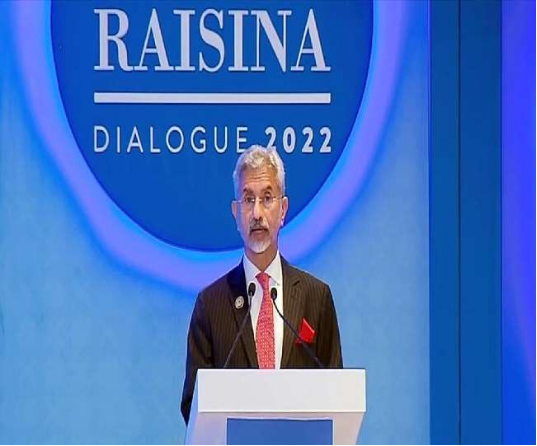 New Delhi, IAS. External Affairs Minister S. Jaishankar said on Wednesday that India will negotiate with the world on its own terms. The country does not need anyone’s approval for this. The External Affairs Minister said in the Raisina Dialogue, we should believe in who we are, not show what they are to please the world. The idea that others define us and that we need approval is an era we need to leave behind.

Jaishankar also said that India should be in the next phase of globalization in the next 25 years. Talking about India at the age of 75, he said, “When we look at India at 75, we have not only completed 75 years, but are looking forward 25 years.” What have we done, where have we stumbled?

One difference we can show is that Indians have shown the world that they are a strong democracy, he said. Regarding the Ukraine crisis, the Foreign Minister reiterated, the best way out of this crisis is to stop the fighting and move the dialogue forward. Jaishankar had said on Tuesday that where were the countries of the world when the rule-based system was in danger and they were put aside.

When asked about India’s stand on Ukraine and Russia conflict, he said, “When the rules-based order was being challenged in Asia, we got advice from Europe, do more business.” At least we are not giving you such advice. He also said that what happened in Afghanistan clearly states what was a rules-based order.

Without naming China, Jaishankar also said that Europe has been insensitive to the security threats posed by Beijing’s conduct in Asia. He also pointed out that Ukraine is not just an example to China because Europe has not been paying attention to what is happening in Asia for the past decade. There has been a lot of argument from Europe that what is happening in Europe and Asia should worry about itself because it can happen in Asia as well.

Imagine, for the last 10 years these things are happening in Asia, even though Europe did not pay attention to them. It is a wake-up time for Europe to start focusing on Asia. This is a part of the world with constant challenges to unstable borders, terrorism and a rules-based order. The rest of the world has to understand that problems are not going to happen here, but are happening.